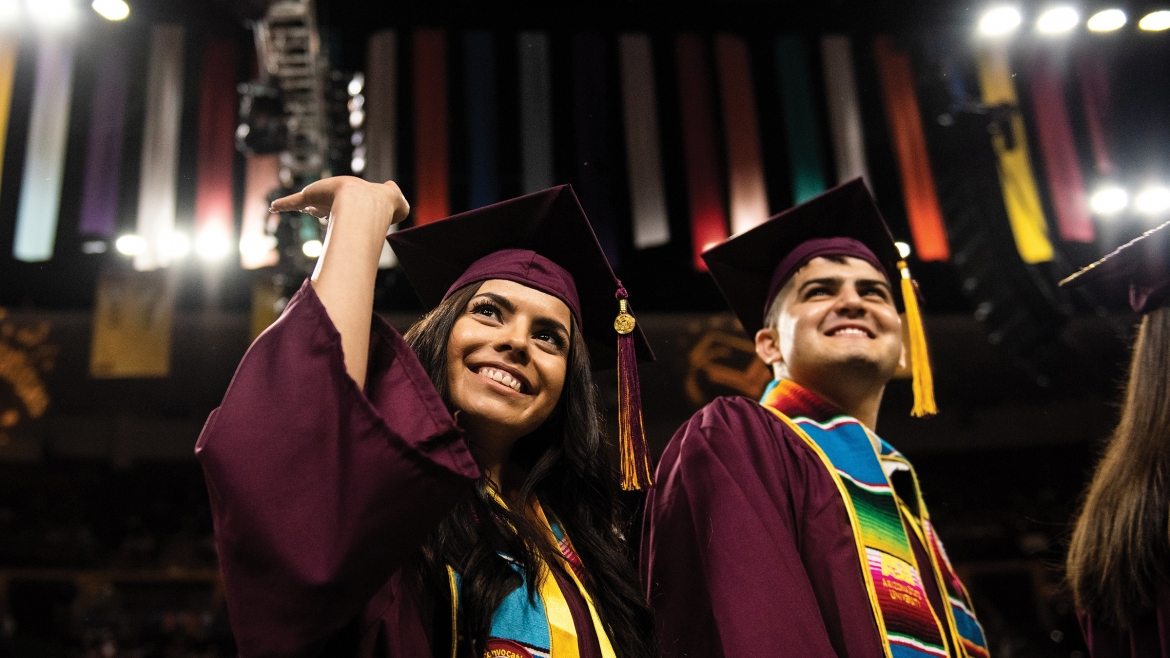 Hispanics make up an increasing part of Arizona’s student population, but the key to their success in higher education is for universities to be intentional about supporting them, according to Arizona State University President Michael Crow.

Crow spoke at the "Arizona Briefing on 25 Years of Hispanic-Serving Institutions,"  a livestreamed event on March 25 sponsored by Excelencia in Education, a Washington, D.C.-based organization that promotes Hispanic student success in higher education.

The event looked at progress over the past 25 years, when the federal designation of “Hispanic-Serving Institution” was created to describe colleges and universities whose student bodies were at least 25% Hispanic.

At ASU, Hispanic enrollment increased 51% for combined on-campus and online students from fall 2016 to fall 2020, to nearly 29,000. ASU's six-year graduation rate for Hispanic students who started at ASU in fall 2014, the most recent data available, was 61% as reported to the Arizona Board of Regents. That’s higher than the statewide six-year graduation rate of 47% for Hispanic students at four-year institutions, according to Excelencia in Education.

But enrollment is not enough, Crow said. Universities must make sure Hispanic students are supported on their path to graduation. Over the past 25 years, ASU has redesigned the university and established purposeful goals.

“We opened the door to working-class and working-poor Hispanic families, but we knew if we did that and no one graduated, who cares,” he said.

“Our outcome in the past 25 years has been a huge acceleration.”

Three years ago, Excelencia in Education awarded ASU its “Seal of Excelencia” to acknowledge the university’s work toward supporting Hispanic students’ journeys to a bachelor’s degree.

“The most important thing we’re doing is lowering all of our shields,” Crow said.

Among ASU’s programs cited by Excelencia in Education were:

The Hispanic Mother-Daughter Program, founded to increase the number of minority, first-generation and low-income students that enter higher education. It has expanded from a one-year to five-year program and now accepts male students and fathers. The program, which starts in the eighth grade, includes mentoring, parent involvement and early outreach. About 73% of HMDP graduates attend an institution of higher education directly after high school, and 56% of HMDP students will graduate college in four years or less. The Joaquin Bustoz Math-Science Honors Program, started in 1985, is an intense academic experience that helps students to pursue university mathematics studies while still in high school. The program offers a university experience for students who are underrepresented in the mathematics and science fields. The Quantitative Research for the Life and Social Sciences Program supports students from the undergraduate to the postdoctoral level. It includes summer research training institutes; long-term support for alumni; research opportunities for undergraduate, graduate and postdoctoral students; and opportunities for national and international visitors. 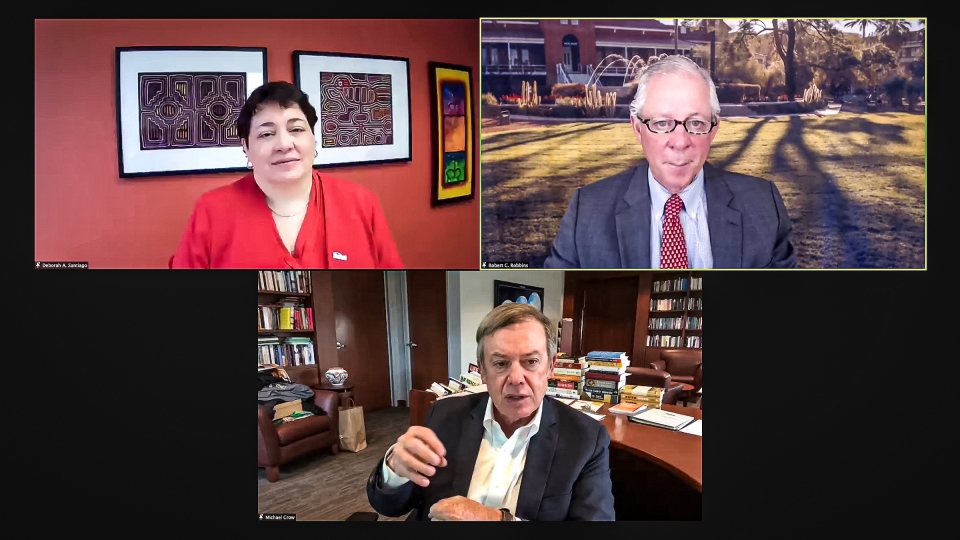 Excelencia in Education co-founder Deborah Santiago moderates a discussion with University of Arizona President Robert Robbins and ASU President Michael Crow during Excelencia in Education’s “Arizona Briefing on 25 Years of Hispanic-Serving Institutions” webcast, Thursday, March 25, 2021. ASU and UArizona are among to most active state institutions providing pathways to Latino student to educational and economic success and advancement. Screenshot by Charlie Leight/ASU News

Deborah Santiago, co-founder and CEO of Excelencia in Education, said that the organization takes a data-driven approach. Among the statistics she discussed:

Population growth has driven growth in the number of Hispanic-Serving Institutions nationwide, which numbered 189 in the mid-1990s and now number 539. Nationwide, 17% of all institutions have the HSI designation, but 67% of all Hispanics attend an HSI. In Arizona, there are 14 HSIs (including the Downtown and West campuses of ASU), and 42% of Latinos attend an HSI.

ASU and the University of Arizona were in the first cohort of 14 institutions to be awarded the Seal of Excelencia, Santiago said.

“ASU and the University of Arizona showed very clearly that using data aligned with practice and leadership are ways to show intentionality and make a positive difference for Latino students while serving all students,” she said.

ASU’s enrollment is approaching the HSI designation, according to Edmundo Hidalgo, vice president of outreach partnerships at ASU.

“We will submit our numbers and we will be on that list,” he said.

The designation, as well as the Seal of Excelencia award, will be a draw in recruiting faculty, Hidalgo said.

“It signals to the academic community that ASU is a place for faculty who want to work with diverse communities in a high-impact environment,” he said.

Tiffany Ana López, vice provost for inclusion and community engagement at ASU, said the award is a validation of ASU’s charter.

“It’s not only access and inclusion, but how they succeed, and Excelencia is recognizing the work we put into our students’ success,” she said.

U.S. Sen. Mark Kelly spoke at the event, and noted that the recently passed federal pandemic aid package will bring some financial relief to Arizona, including $2.6 billion for Arizona’s public K–12 schools and $683 million for the state’s higher-education institutions, as well as $187 million for broadband internet access in rural areas.

“Arizona’s Latino population is young and the state’s economic success is connected to Latino college attainment, particularly those pursing degrees in STEM fields,” he said.

“Arizona’s companies are depending on us to produce an educated workforce that will strengthen our economic position in the world.”